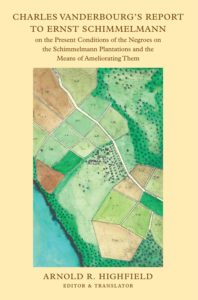 Charles Vanderbourg (1769–1827) traveled to the Danish West Indies in 1796 at the behest of Ernst Schimmelmann (1747–1831) with instructions to make observations about conditions among the enslaved laborers on his family’s West Indian estates and then offer suggestions for improvements. He was a French aristocrat in flight from the reign of terror in his native land. After 21 months in the Danish islands, he returned to Europe and presented his Report to Schimmelmann in 1798. That document represents one of the earliest attempts at ameliorative reform. It covers broad areas such as of the work of the enslaved, their punishments, and matters concerned with health, shelter, food, clothing, and the like. This book builds on those basics, offering a short sketch of Vanderbourg the man, his time in the Danish West Indies, some of his correspondence, a short bibliography, a glossary of terms, and an index.

ARNOLD R. HIGHFIELD is a retired Scholar-in-Residence and Emeritus Professor at the University of the Virgin Islands. He has published some twenty-plus books on V.I. History, including The Cultural History of the American Virgin Islands and the Danish West Indies: A Companion Guide; St. Croix: 1493, An Encounter of Two Worlds; Time Longa’ Dan Twine; St. Croix 1650–1733: A Plantation Society in the French Antilles; Sea Grapes and Kennips, and Crucian Recollectionsto mention only a few of the more recent volumes.