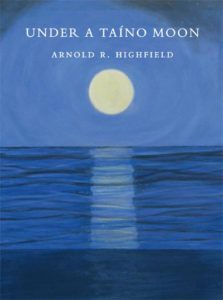 The poems in this volume were written during a period when the author spent his time both in his lovely Caribbean home on St. Croix and also in the pristine New England setting of Middlebury, Vermont. Arnold R. Highfield has published verse in a number of journals, including The Caribbean Writer, Ethos, The Lyricist, Kruispunt, Yellow Cedars Blooming, Seasoning for the Mortar, Collage One, Collage Two, Collage Three, Collage Four, and others.He also has a volume of poetry entitled An Archaeology of Names that appeared in 1993.

Marvin Williams, a long-time friend, poet, and editor of The Caribbean Writer,had this to say about Under a Taíno Moon: “Whether in musical haunting lyrics, in odes that treat of friendship and their idiosyncratic ports which include the imagination, or in narratives that engage language’s possibilities, human vulnerability, and the enduring masquerader/un-masker that is history, Arnold Highfield’s verse vibrates with the energy of possession and reclamation, arching/aching to that agitated archipelago, self, which enriches and finds nourishment in all others.”

ARNOLD R. HIGHFIELD, a retired Scholar-in-Residence and Emeritus Professor at the University of the Virgin Islands, has published some twenty plus books on the Virgin Islands, including: Charles Vanderbourg’s Report to Ernst Schimmelmann;The Cultural History of the American Virgin Islands and the Danish West Indies: A Companion Guide; St. Croix: 1493, An Encounter of Two Worlds; Time Longa’ Dan Twine; St. Croix 1650–1733: A Plantation Society in the French Antilles; Sea Grapes and Kennips; and Crucian Recollections to mention only a few of the more recent volumes.

This is the second printing of a book originally published in 2008. We’ve had many requests to bring it back to life.