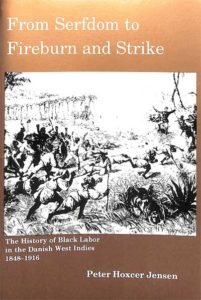 This book appears at a time when there is tremendous local, regional and international interest in 19th century emancipation in the West Indies. That event occurred in the U.S. Virgin Islands – the erstwhile Danish West Indies – on July 3, 1848. Peter Hoxcer Jensen’s fascinating new book takes up where the story of slavery leaves off and where the hard road to freedom begins. Employing previously unused materials form Danish archival and administrative sources, Jensen traces the ex-slaves’ journey from servitude, through neo-serfdom and revolt on the sugar- and cotton-producing estates where they had previously been slaves, to their emergence as an autonomous labor movement in the early 20th century. In the middle years of World War I, the disenfranchised laborers formed a labor union and struggled for recognition from the colonial government and the plantocracy, both of which continued to regard them narrowly through the distorting lens of race, color and class interests. The successful strike of 1916 played a significant role in the development of a cohesive labor movement, the nurturing of local leadership, the granting of freedom of the press and, eventually, the sale of the Danish islands to the United States in 1917. Jensen has provided us with the first scholarly study of this important period, in a treatment that is both broad and deep. From Serfdom to Fireburn and Strike is destined to take its rightful place alongside earlier ground-breaking works of Waldemar Westergaard, Isaac Dookhan, N. A. T. Hall, C. G. A. Oldendorp, and John Knox as an original, seminal study that advances Virgin Islands and Caribbean historiography.

PETER HOXCER JENSEN (cand mag) studied at the University of Aarhus and subsequently taught in several schools in his native Denmark and in Europe. In the early 1980s he did field work on St. Croix and taught briefly at the College of the Virgin Islands. Among his publications on the Danish West Indies are studies on the introduction of free labor into the Danish West Indies, D. Hamilton Jackson and the Labor union and a regional bibliographical essay. His sudden death in November of 1989 deprived Caribbean scholarship of one of its brightest young stars. The translation from the Danish was done by Anders Bendsen of Aarhus, Denmark and Arnold R. Highfield, University of the Virgin Islands.

The translation from the Danish was done by Anders Bendsen of Aarhus, Denmark and Arnold R. Highfield, University of the Virgin Islands.