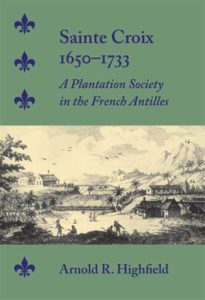 In spite of the French name, few are aware of the long period of history from 1650 to 1733, when the island of Sainte Croix (Ay-Ay) was under French dominion. After some twenty centuries of previous Indian occupation, Spain claimed Ay-Ay in 1493 and renamed it Santa Cruz. There followed some 137 years of Spanish ownership, during which time the island remained isolated and unoccupied. Then from 1630 to 1650, settlers from The Netherlands, England, and France all converged on the island and contended bitterly for its possession.

In 1650, Chavalier de Poincy, an ambitious French nobleman and powerful Knight in the Order of Malta, snatched the island from beneath the noses of the Spaniards, renamed it Sainte Croix, and integrated it into the French Antilles. Under French dominion, Poincy undertook the development of the island first as a tobacco and later as a sugar-producing colony, with varying degrees of success. During the forty-six years from 1650 until 1696, Sainte Croix became a turbulent theatre for the adventures of numerous Frenchmen—ranging from corrupt royal administrators through military men, merchants, ship captains, ambitious clerics, Knights of the Order of Malta, soldiers of fortune, bondmen, slave traders, yeomen farmers, buccaneers, smugglers, and privateers, among others.

Here are played out the adventures of the struggling Governor François DuBois, the far-ranging privateer Michel Grammont, the buccaneer Captain Martel, the adventurer Jean-Baptiste DuCasse, the self-serving Governor de la Saulaye, and the opportunistic entrepreneur Chevalier de Poincy, all combined with the labors of hundreds of French bondmen and African slaves. The Danish colony on nearby Saint Thomas in particular attracted a good deal of illicit trade with Sainte Croix as the French colony struggled to attain economic viability. But that goal was unfortunately beyond the desperate island’s reach.

In the end it was France’s engagement in the War of the League of Augsburg (1688–1697) that caused King Louis XIV to lose faith in the Sainte Croix project in 1696, largely because it was poorly positioned geographically among the combatants, problematic to supply, and difficult to defend against the Sun King’s many enemies. After 1696, would-be English, Brandenburg, and the Danish settlers, all showed a keen interest in obtaining Sainte Croix after it had been evacuated and abandoned. However, by 1730, diplomatic relations were largely such in Europe that the French Crown found itself disposed to sell the deserted island to neutral Denmark’s Danish West India and Guinea Company. In these pages, observers of the island’s long history will be afforded a detailed examination of the French Crown’s many failures, as told by one of the Virgin Islands’ leading scholars, to develop Sainte Croix as a successful Antillean colony, as well as to avert the island’s subsequent change of direction in favor of Denmark.

ARNOLD R. HIGHFIELD, a retired Scholar-in-Residence and Emeritus Professor at the University of the Virgin Islands, has published some twenty plus books on the Virgin Islands, including: Charles Vanderbourg’s Report to Ernst Schimmelmann; The Cultural History of the American Virgin Islands and the Danish West Indies: A Companion Guide; St. Croix: 1493, An Encounter of Two Worlds; Time Longa’ Dan Twine; St. Croix 1650–1733: A Plantation Society in the French Antilles; Sea Grapes and Kennips; and Crucian Recollections to mention only a few of the more recent volumes.

This is the second printing of book originally published in 2013.