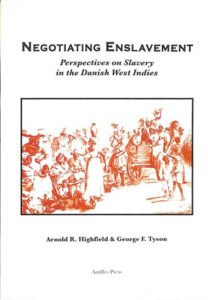 Slavery endured in the Danish West Indies from 1672 to Emancipation Day on July 3, 1848. During those 176 years, some 100,000 Africans were transported to the Danish islands and made to serve as laborers in one capacity or another. For most, it was an existence of interminable, monotonous and life-threatening labor that has now been well documented. It is, however, possible to see gradual change as this historical process wore on. This gave rise to slow transformations in the population, as well as in the hierarchical organization of the economy and its society. These differentiations provided opportunities for advancement, and individuals were not lacking to step forward to take advantage of them. This book is about those changes and the individuals who devised the means to negotiate slaver and to influence their own destinies.

In this collection, several articles examine slave law and slave society while others look at how some of the enslaved managed to make the most of these circumstances: Mingo Gesu who became an assistant plantation manager while still a slave and George Frances who actually made the transition from slave to plantation owner. Other articles consider topics such as resistance in the form of cultural marronage, a slave revolt in Tortola, rebellion and emancipation along the Gold Coast, and the quest for freedom of enslaved Africans in Denmark. In some cases, circumstances afforded the means for negotiation servitude, most prominently in the areas of education and manumission, both of which were widely utilized by the enslaved. In addition, there was the constant pressure of the enslaved themselves for liberation that influenced the decisions and policies of Danish authorities, including Governor Peter von Scholten’s plan of gradualism.

Finally, there was the Emancipation Revolt of July 3, 1848 itself which sprange to life in the masses and short-circuited von Scholten’s policies. Several articles consider the nature and consequences of the Emancipation Revolt itself and its influences in the years that followed, locally as well as in its hemispheric perspective.

ARNOLD R. HIGHFIELD is Professor Emeritus at the University of the Virgin Islands, St. Croix Campus.