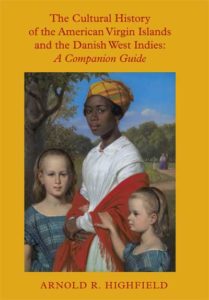 Recently, it became apparent to Virgin Islands historian Professor Arnold R. Highfield that his research databases contained thousands of records that would never be available to the general public. He therefore decided to organize those materials into a single volume that might be useful to anyone working within the scope of Virgin Islands studies.

Highfield’s new book, The Cultural History of the American Virgin Islands and the Danish West Indies: A Companion Guide (available June 1, 2018), offers insights into why a group of small islands in the Caribbean—visited in 1493 and named the Virgin Islands by Christopher Columbus under the auspices of Spain, then claimed by several different countries over the past five centuries—has evolved into the present day Virgin Islands of the United States. It is an enchanted history that involves many diverse people and varying circumstances.

Over the years, Highfield’s labors have resulted in extensive research and in numerous other publications. His new volume is in effect the 40-year compendium of a Virgin Islands historian who has dedicated his career at the University of the Virgin Islands to the study of the history and culture of the Danish West Indies (1671–1917) and the Virgin Islands of the United States (1917–present).

The Cultural History of the American Virgin Islands and the Danish West Indies: A Companion Guide is aimed at general readers, students, teachers, researchers, scholars, librarians, archivists, and others. To that end, the materials have been arranged around the concept of central topics, connected to satellite articles by means of detailed cross-referencing and the interlocking of relevant sources. The 900-odd articles cover a broad variety of subjects, including the islands’ diverse population, groups, events, history and key documents.

By way of illustration, the article “Slavery” is a central topic with vectors extending outward to other subjects such as the Slave Trade, Slave Traders, Amelioration, Abolition of the Slave Trade, Resistance, Revolts, Emancipation, and more. The reader can therefore simply read the central topic of interest and then pursue the subject in greater detail in the satellite articles.

Arnold R. Highfield, a retired Scholar-in-Residence and Emeritus Professor at the University of the Virgin Islands, has published some 20-plus books on the Virgin Islands, including: St. Croix: 1493, An Encounter of Two Worlds; Time Longa’ Dan Twine; St. Croix 1650–1733: A Plantation Society in the French Antilles; Sea Grapes and Kennips; and Crucian Recollections to mention only a few of his more recent volumes.

The Cultural History of the American Virgin Islands and the Danish West Indies: A Companion Guide will be available