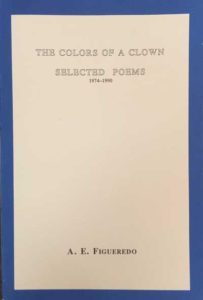 by A. E. Figueredo

Alfredo E. Figueredo was that rarest of poets who could effectively and authentically cast the experience of a modern life in the form of traditional meter and rhyme. Drawing on his rich store of knowledge of western literature and history, he wrote verse in which the power of his own poetic vision was naturally complemented by the grace and suppleness of traditional forms. It should be noted that he was a completely bilingual poet, writing as with the same sure hand and sharp eye in Spanish as in English. Figueredo was one of the founding members of the Collage group of writers on the island of St. Croix in 1989. In the following few lines, one can form an idea at least of his mastery of the language and the quiet beauty of his well crafted lines.

From the poem, “To Suzie B., After an Old French Mode”:

What marks my place and keeps me here
Beneath the flight of countless stars?
Who steers the moon above my eyes
And stately sails her course amain?

A.E. FIGUEREDO was born in Victoria de las Tunas, Cuba, April 10, 1949, and died November 24, 2013. He received a B.A. from Queens College in 1971, an M.A. from University of Connecticut in 1978, and worked on a Ph.D. at the University of Massachusetts, but did not complete the degree. He published Jalones de Poesía in 1974. He was a primary contributor to Collage One in 1990. He traveled widely, in Canada, Europe, the eastern United States, and the Caribbean Islands as well as Venezuela. His principal interests were philosophy, history and literature. He was a part-time instructor in the fields of anthropology and history at the University of the Virgin Islands, St. Croix Campus and later taught at Florida International University in Miami. He received the Elsa Sherman Memorial Award in Poetry in 1967.